The United States and European Union launched negotiations on one of the world’s most ambitious free-trade agreements on Monday, promising thousands of jobs and speedier growth on both sides of the Atlantic.

Such a plan was first considered three decades ago but knocked down by France in the 1990s. Europe has now managed to get Paris onside, opening the way to a deal that could boost the EU and U.S. economies by more than $100 billion a year each.

“This is a once in a generation prize and we are determined to seize it,” said British Prime Minister David Cameron, flanked by U.S. President Barack Obama and the presidents of the European Commission and the European Council at the Group of Eight summit near Enniskillen in Northern Ireland.

The first round of negotiations will take place in Washington on July 8, the White House said in a statement. 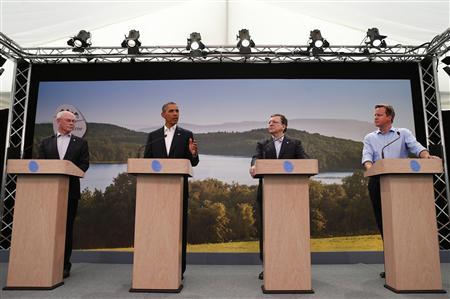 The United States and Europe account for almost half of the world’s total output and a third of its trade. A free-trade deal therefore holds the prospect of massive economic gains and accompanying jobs.

While both U.S. and EU negotiators are aware that a final deal will be tough to clinch, they are also conscious of the rising power and influence of China and the need to deepen Western economic integration in order to compete with Asia.

France had threatened to block the start of talks until the EU’s other 26 governments accepted its demand to shield movies and online entertainment from competition from Hollywood and Silicon Valley.

Paris eventually won its exception, but Jose Manuel Barroso, the president of the European Commission, said on Monday opposition to a fully comprehensive trade deal was “reactionary” and part of an anti-globalization agenda.

That sparked a stern response from French President Francois Hollande and other French officials, underlining just how sensitive negotiations over the coming 18 months are set to be.

Obama also warned against narrowing the scope of negotiations.

“It is important that we get it right and that means resisting the temptation to downsize our ambitions or avoid tough issues just for the sake of getting a deal,” he said.

The United States and the European Commission, the executive arm of the 27-country European Union, hope for a free-trade deal by the end of 2014 – a tight deadline in complex international trade talks that usually take many years.

“We must maintain that political will in the months ahead,” Cameron said.

The London-based Centre for Economic Policy Research estimates a pact – to be known as the Transatlantic Trade and Investment Partnership – could boost the EU economy by 119 billion euros ($159 billion) a year, and the U.S. economy by 95 billion euros.

However, a report commissioned by Germany’s non-profit Bertelsmann Foundation and published on Monday, said the United States may benefit more than Europe. A deal could increase GDP per capita in the United States by 13 percent over the long term but by only 5 percent on average for the European Union, the study found.

Following the collapse of global trade talks in 2008, both the United States and Europe have sought to strike as many free-trade agreements as possible, and Brussels alone is negotiating with more than 80 countries.